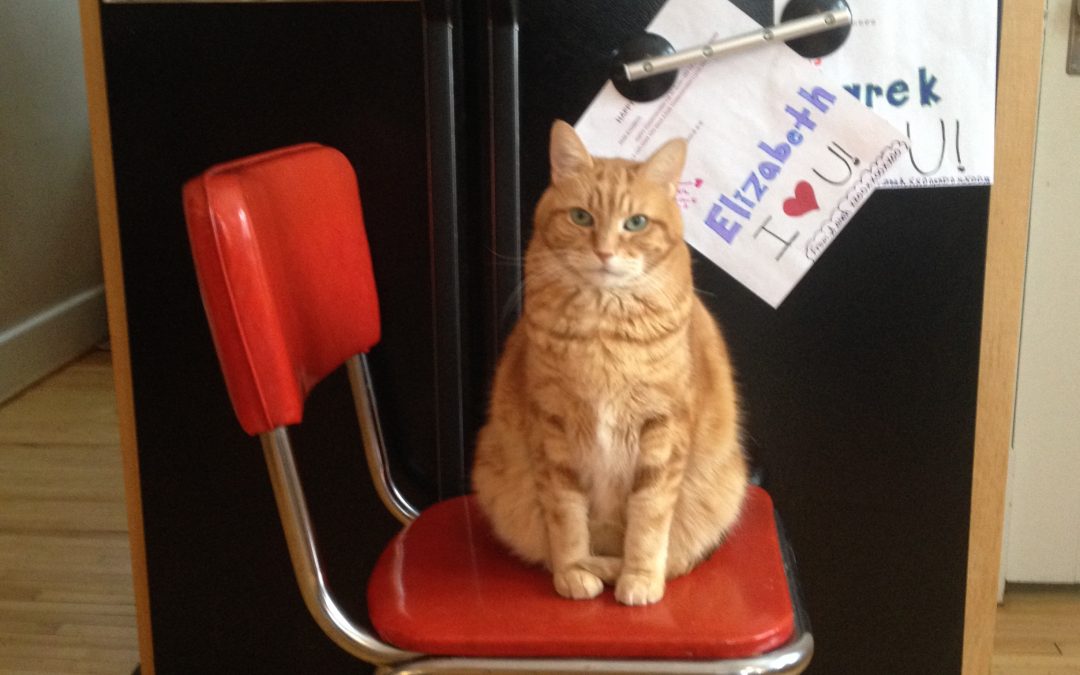 If you know The Book of Squidly Light, you may know that the Cat Fatty Lumpkin is on record as lamenting his regrettable Lack of Thumbs, and you may also know that Another Character has been privileged to read his diary. Almost no one else has seen it! However, due to the apocalypsish peculiarities of this time in history, new publishing realities, and the prevalence of zombies — well, we only know of one, but he is pretty frickin’ prevalent — we are herewith, heretofore, and hereby resolving that The Lumpkin Diaries will be published as part of this blog, in serial form. (Just like Dickens!) The adventures recounted here happened in real life, exactly as described.

Fatty began his diary out of frustration at becoming an indoor cat, though in a larger house with fine window access. While Karima (a.k.a. Mother) regretted his distress, it was really just too dangerous out there, both to Fatty and to various birds and one chipmunk! A beloved elderly neighbor used to inquire hopefully whether he was still alive (hoping not, as he made a habit of sitting under her bird feeder). But Fatty had the last laugh: When she died a peaceful death well into her 90s, he was still around.

The Lumpkin Diaries Part One: The Daring Raids

The Lumpkin Diaries, 13:00, 10.11 hours, weather cold, no wind. Successful raid on highest cupboard last night. Technique has improved: was able to dine in place without knocking 17.6-lb bag of catfood to floor. Mother’s attempt to close bag with chip-clip unsuccessful. We are gaining and collating new knowledge all the time. F.Y.I., Radar Love Felinestein*

Radar Love Felinestein, this is Fatty Lumpkin. You asked me quite a while ago how to get into the refrigerator. Please excuse the discourtesy of such a delayed reply. The procedure is simple. You simply insert your paw in the crack under the door or, alternatively, your nose in the crack between the fridge and freezer, and pull or push. (This method may also be applied to cabinet doors with good effect.) Even if your fridge doors are too tight for this, the humans are sometimes careless and close them imperfectly. You can make a patrol several times a day to see if this has happened. I do. Finally, none of this will avail if The Red Chair of Death has been placed in front of the fridge. But you can sit on it while contemplating your next move. A word of cheer: The humans always slip up eventually; I got some turkey the other night.

Weather cloudy, wind indeterminate. The humans made a turkey in a roasting pan, placing the leftovers in the refrigerator, and Mother put the Red Chair of Death against the fridge door, making entry impossible. But that was where they made their mistake. She washed the roasting pan, then left it on the Red Chair for some taller person to return to the high shelf. And I went and sat in it! Guess I scotched that little plan! (At least she had to wash it again to pay for all my trouble.)

I snagged most of a free range salami for myself and my brothers from the fridge this morning. We did not appear for breakfast, as we did not require any little kibble bits. – F. Lumpkin

The Lumpkin Diaries, 13:00. Declined invitation to breakfast. Mom: I know I put the chair back in front of the fridge!” Dad: “Yeah, while you were away he learned to move the chair — I put two chairs now.” 1/2 order roast turkey, dressing, mashed potato, gravy. Also 1/2 steak and fried onions. Tasted nice. – F. Lumpkin

*This International Cat of Mystery was Fatty’s closest online companion during their time on earth and plays an intimate, though physically distant, part in his adventures.