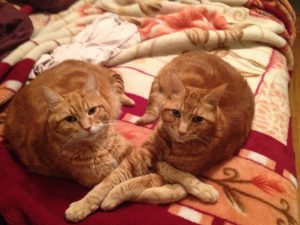 9/19/14   Weather variable, date whatever. Dear Diary, only in your kindly pages would I disclose what I am about to say. So glad I have you to talk to, Diary! Okay, here it is: Though I am a most dominant and daring cat in the areas of food-stealing and sneaking outdoors – an example for all cats to follow – for some reason sleeping spaces are different. My brother Venchy is pulling his ‘corporate takeover’ again. He sits on the strategic corner of the big bed at night and tells me, “Karima is MY mommy, NOT your mommy! You can’t be in here, you have to go away!” And to my shame, I do. I skulk away and sit at the bottom of the stairs wearing my sad-old-man face. If Karima figures out this has happened, she comes and gets me, but still . . . Diary, I’m so glad I have you to confide in, as I would not want anyone else to know. – F. Lumpkin (a.k.a. Benjamin Felinus)

5/24/15   Editor’s Note:  What follows was evidently written to his friend Radar, Turkish-born International Wondercat of Mystery.

Many happy returns of the day, Good Sir!

I must unburden my heart to you regarding a Certain Matter: My brother Venchy Cat is getting all the attention! They are always fussing over him, and he gets pills, subcutaneous water, special food . . . Do I get any of these things? No! It puts me in mind of the Biblical quote where somebody complained to his father, “You never gave ME a fatted calf that I might make merry with my friends!” No, they didn’t. They did not even give me a chicken wing.

Yours, with kind regards but in some disgruntlement, F.  Lumpkin

Editor’s Note: Be careful what you wish for!!!
Karima’s Note: Believe me, Lumpkin, you wouldn’t like it if you had it!

7/25/15   Dears, Fatty Lumpkin has some kind of crazy brain/neurological thing and is at the University veterinary hospital right now (went in last night) with an M.R.I. scheduled for 1:00 p.m. He’s as nice and wonderful a cat who ever lived – your prayers and good thoughts would be much appreciated. My impression is that this could go either way.

Editor’s Note: The next two days were terrifying for those who loved Fatty Lumpkin. He not only stopped eating, but spend time sitting in a corner staring blankly at the wall, did not respond to any overture from us or the other cats, and was totally without affect. A creature less like the loving, witty, self-determined, and adventurous cat we knew could not be imagined! A vet at University of Minnesota emergency who did not know him asked, “Is this cat normally unengaged?” (We were torn between outrage and hysterical laughter.) But Dear Reader, we will not prolong your agony of suspense. (Well, okay, it might not be that bad because most of you didn’t know him, but surely you’re getting a sense of him by this time — we assure you that everything in this Diary is entirely in accord with his actions and behavior.)

7/26/15   Editor’s Note: Fatty Lumpkin is okay!! Long story, but we had to run to the U of M emergency vet again last night. He had oxygen, stayed over, and is now absolutely back to his normal self — loving, feisty and brilliant. They’re baffled. He apparently poisoned himself somehow, but we may never know what it was.

8/29/15   Editor’s Note: Fatty Lumpkin ate something!!!!!
I drove to the Dances of Universal Peace retreat at 4:00 this morning (Note to self: don’t do that, you can’t see signs in the dark), came home and petted him on the porch swing for about 20 minutes. His red, toast, and marshmallow-colored fur was so beautiful in the sun, and his neck fur glistened like metallic gold, it really did. And then he ate almost a whole slice of roast turkey. *The Cat Who Forgot How to Eat* may have a happy ending after all.

Undated Editor’s Note: Fatty had a terrible relapse without the loss of affect, but with a complete inability to eat or drink, as though he had forgotten even how to lap water. He did learn to signal us when he was thirsty. (By a look in the eyes? Some sound or movement? Writing this years later, I forget how he communicated, but it was the equivalent of a paralyzed patient ‘talking’ by twitching one eye lid.)  But read on . . .

9/10/15, 900 hours.  Latitude diffuse, weather variable. Tonight I awakened from a dazed state (possibly induced by some plot on the part of the humans). I had vague memories of being fed turkey baby food through a syringe and believe this had continued for several weeks or months. In front of me on the bed was a plate of Mother’s taco fixings, including some browned ground turkey, of which Mother is fond. I ate it. She did not appear to notice, being absorbed in Grey’s Anatomy. To repeat, I ate it. It was almost too easy. — F. Lumpkin

10/07/15   “I still got it!” – Jimmy Durante. “Yeah, baby!” – Austin Powers. My Mommy came downstairs just now to make tea and found (a) the refrigerator door wide open, (b) a package of tomatoes upside down on the kitchen floor and (c) (Score!) A package of kosher beef hotdogs on the dining room rug. Slightly opened and eaten, bearing evidence of “tooth and claw”. And I looked at her with such innocent eyes! – Yours truly, F. Lumpkin