From the Author: “This Cat is a Genius” 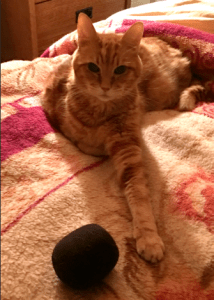 You may have noticed a theory circulating in the best literary circles that Fatty Lumpkin (F. Atty. Lumpkin, Esq.) is actually the unnamed Orange Cat who appears briefly in The Life and Times of Halycon Sage. While remaining silent on this issue, the Author has provided an update on the activities of this enigmatic animal. This message from the Author was (a) found in a salt-and-sand-worn bottle thrown up on the shores of an unnamed inland sea, (b) handed off through a series of spies masquerading as business persons, hotdog vendors and bicycle messengers, or (c) is the newest breaking news in the current Alien Time Travel Scandal, so was probably written sometime previously. And whatever the truth of these guesses and suggestions, it is now my solemn duty to assure you that the story below is TRUE. I have it from the Author herself, who was a eye witness.

“Ok, this is weird. If you’re following The Adventures of Fatty Lumpkin (F. Atty. Lumpkin, Esq.), you know that he has a new toy he carries everywhere, to wit, a black foam microphone cover, which he believes will solve humanity’s problems.

Now some of you may think that I’m writing Fatty’s posts, and maybe I thought so too. But after Fatty described his new possession, his Facebook friend Radar the Turkish Wondercat (so handsome!), said, ‘I want one! Do you have two?’ Fatty replied that he would check into it and report back soon. All normal so far, right?

But in the weeks that he has been carrying this object around, we’ve only seen one of them. The next day, after the conversation, suddenly there were two. This cat really is a genius. Is there something going in here that I don’t know about?”