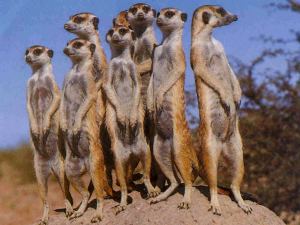 Meerkats! First, who is Fatty Lumpkin? (Or, alternatively, F. Atty. Lumpkin, Esq.)? While this is an important question that will be answered in the fullness of time, we have more pressing matters to deal with at the moment, so will be preceding to the vital public service message without wasting time on preliminaries. For now, it is enough for you to know that F. Lumpkin is a distinguished and highly educated orange cat, with stripes. (If you comb the pages of The Chronicle, a.k.a, The Life and Times of Halycon Sage, you will see that those pages, in fact, do contain an orange cat. There may be some connection or this may be mere coincidence. “Mere”heh heh heh [insert dry editorial chuckle].)  Be warned: Fatty Lumpkin himself is sometimes a little touchy, but that is arguably the prerogative of an esteemed and highly educated felinus domesticus. Go ahead, Mr. Lumpkin.

F. LUMPKIN: Friends, it has come to my attention that there is an animal, a warm-blooded mammal, currently being referred to as “a meerkat”. A photograph of said animal accompanies this message. I must protest the describing of any creature as a “mere cat”! While this animal is obviously inferior to the true cat – its stance is oddly humanesque, its ears are too rounded, and its expression somewhat vacant, thought its tail is quite pleasing – still, it is obviously some sort of cat, otherwise why the name?

This has come to my attention, and I must protest.  I am herewith filing an ORDER TO CEASE AND DESIST, a WRIT OF MANDAMUS, a BILL OF ATTAINDER and a BILL OF LADING. The individuals or groups using this term, to wit, “meerkat” or “mere cat” must CEASE AND DESIST immediately! Or somebody might leave a little present on your pillow. Because we all know that the Cat is a most extraordinary and admirable animal, and that a cat, no matter how oddly shaped, can never be “mere”. Thank you.