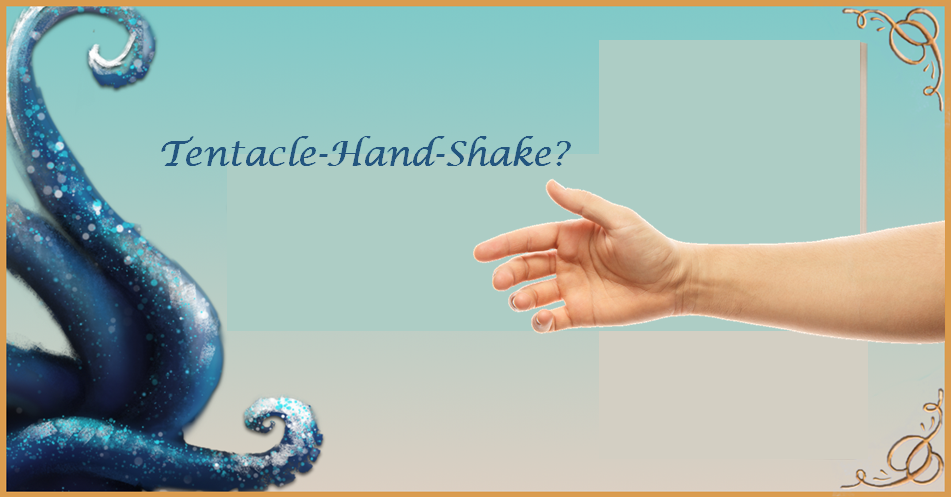 SQUID: You ask what was I thinking during that historic first meeting? Well, it could have been historic, but for the conduct of the Eartheans later that same minor-sun-cycle. As it turned out, it’s a wonder we even . . . but I have been instructed not to say too much.

Erhmmmm (untranslatable throat-clearing noise, also difficult to explain because the Squidren do not exactly have throats). Why don’t you ask my colleague here, this Hoo-man with the singularly appropriate and melodious name?

MODERATORS: We must tell you that Alexander Preisczech’s English comes and goes when he is busy, tired, excited or upset. Evidently he is taking this conversation personally, probably because the sensitive issue of his name has arisen.

HUMAN: Excuse please, I am not understanding instruction. Prompter said, “Why is his (presumably my) name so long and crazy?” I am not understand this criticism. Long, yes. For ceremonial occasion, ceremonial name is required, not Shorty, Fatty or Biff. So, not Alex — dignified, yes, but not long enough.

Even Alexander Lazlo Preisczech —  is finally safe to reveal my legal name, since is no more law, government all that stuff that used to follow me around. Even that fine name is not dignified enough for the meeting of two worlds. So, name is not long, name is appropriate!

So, that is that, but crazy? Crazy? My friend, if you had been followed everywhere, your name bellowed out in every supermarket, even posted in huge letters in a chain department store, you are the one would be crazy. This is why I needed to be clever, like secret agent, and assume new name. Yes, several new names. Motorcycle gang from Dirty Dog Bar (now Somebody’s Juice Bar) used to laugh hard when I came in with new name! Was very humiliating! But they explain to me that Flint Stone did not sound like cool spy, sounded like cartoon character.

MODERATOR: Apologies. So, secondly I’m instructed to ask you: What did you Squidren think of Mr. Preisczech and the other humans when you first met them?

SQUID: Their good manners were appealing, despite their odd appearance. Four pathetic little limbs; something on top with fungus sprouting out of it which turned out to be a head; a dry, shimmerless surface — these things did not inspire confidence. But their welcoming silence and the way their Pope** stepped forward and gave his name after I had “broken the ice,” these things were very pleasing. And the final touch that convinced us, perhaps wrongly, that the Hoo-mans were the dominant species on Earth was the fine, elegant, and ceremonious name of my friend here, Doctor Alexander Flintstone Lazlo Buddy Macadamian Preisczech.

**Their Pope? What? Sorry, to find out, you’ll just have to read the book.